All You Need To Know About Toilet Auger 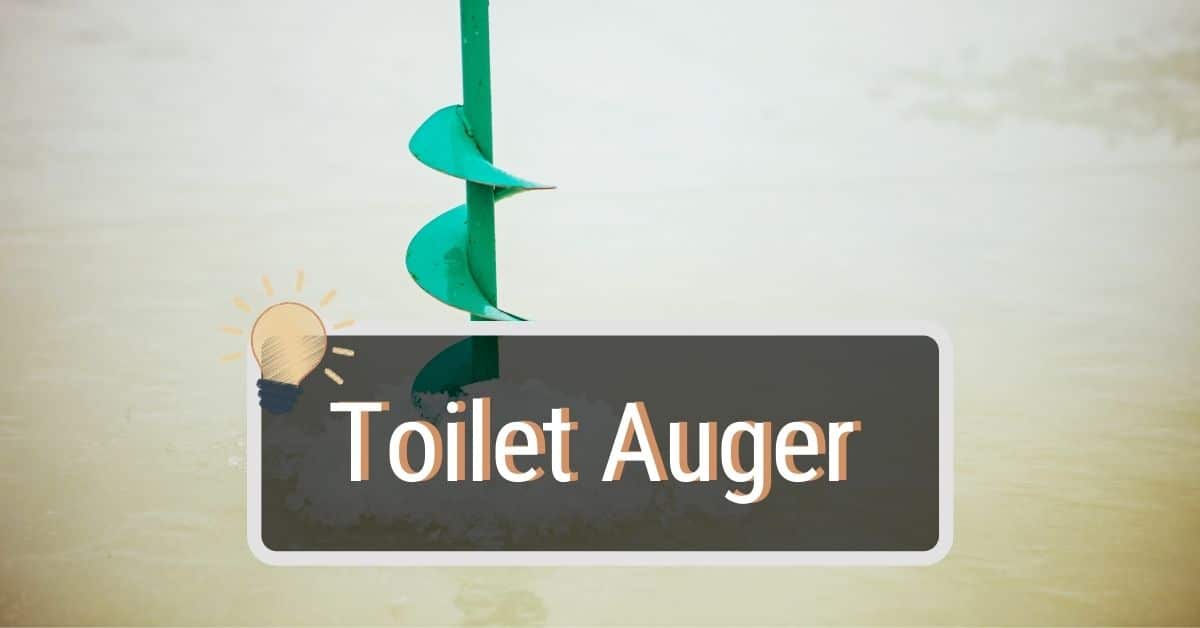 English could be a funny language; in which, a mare is an adult female horse, but a nightmare is a frightening dream or an unpleasant experience. Speaking of nightmares, have you ever experienced flushing the toilet, only to find the water backing up instead of going down the drain? If this itself isn’t sickening enough, imagine being in this situation at a place you’re visiting as a guest. Would you ever put a guest of yours in such a position? “Do unto others as you would have them do unto you” – Golden Rule, Bible.

Without going much into the details of what horrors a clogged toilet can bring to your 5 senses, let us understand what toilet clogs are, and the popular culprits behind a clog.

What is a toilet clog?

A toilet is said to have a clog when the water from the toilet backs up because it is unable to pass down the drain, either fully or partially. This hindrance in the flow is caused due to a blockage, which could be a result of multiple factors. However, in most cases, somewhere or the other, it comes down to our own carelessness and ignorance. A lot of the things that we find ‘safe to flush’ are actually not exactly safe to flush, even if they do not create chaos the first time we send them down our toilet bowl.

It is also important to keep in mind that while certain clogs are formed in the toilet itself, they can also be formed in the drainage pipes of your system. Both of these can be dealt with properly if the right tools and approaches are used.

Stuff that clogs the toilet

Hairfall has become a very common condition, especially in the past couple of decades. Perhaps with the increased use of chemical products on our hair for the purpose of styling? Whether it is hair that gets trapped in the bristles of our hairbrushes or the hair from our recent trimming of the beard, the hair must not be flushed down the drain. All this hair can be discarded in the trash bin. The hair accumulates and constitutes largely the gunk that is created by stuff getting trapped into the net of our hair. It is also accompanied by soap scum and residue of other products. The accumulated hair on its own as well can become significant enough to create a clog in the toilet drain.

Some people prefer using wet wipes instead of toilet paper, for very understandable reasons. However, on one hand, the toilet paper degrades when flushed with water, on the other hand, the wet wipes are made from material that does not degrade easily in water. This has caught many eyes and the stakeholders have started wondering if the term ‘flushable’ should be allowed to be used with these wet wipes. These wipes are second on our list of things that clog our toilet drain.

Toilet paper is made from natural fibers such that it degrades quickly in water. Wipes, on the other hand, are becoming rapidly notorious for causing plumbing issues (even if labeled “flushable”) – both at the home and at the city level – because wipes are made from non-woven material that does not disintegrate easily.

If this heading sounded odd to you, we’re happy! But know that it’s not uncommon for people to actually throw food items into their toilet bowl and flush it down. Pieces of food can not only get stuck and create gunk, the grease on them dries up creating layers on the inside of your drainage system.

What to do if the toilet clogs?

Having spoken about the different culprits behind a clogged toilet drain, it’s now time to talk about the remedies for this issue that will do the job for you.

Indeed, the intention behind this discussion is to achieve the following two results:

Therefore, in the scope of this article, we will not be suggesting to you the obvious ultimate solution of calling in your local plumber. Instead, we will focus on a tool specifically designed for toilet drain clogs—The Toilet Auger.

The toilet auger, or otherwise known as the closet auger is shown in the picture above and is a tool that can be found in your nearby hardware store. It has a handle that you can crank to control the length of the cable that goes into the toilet drain.

How to use the toilet auger?

Lower the drain auger in the toilet bowl

As you push the handle down to extend the toilet auger cable in search of the blockage, also crank the handle several times in both directions, especially when you feel resistance in the pipe; you’ve probably reached the blockage. This will give the cable a rotation effect, thus ensuring that it doesn’t pass through the blockage, instead, clears the path thoroughly.

Now that you’re done clearing the path by pushing the gunk down with the drain auger, do not take out the whole set-up. Remember to pull the handle all the way up again while keeping the curved end of the toilet auger still at the bottom of your toilet. Now, pull out the toilet auger (you do not need to crank it anymore). This will ensure that the metallic cable does not damage the inside of your porcelain toilet, as mentioned earlier.

You’re done. Flush your toilet and see the magic! P.S. Do not forget to rinse the whole unit, since it has seen a whole lot of mess in the process.

Apart from using the toilet auger, one other type of remedy to relieve a toilet clog is what is called a drain snake (plumbing snake). These snakes are of various types too. However, the way a drain snake works is that when it’s sent down the drain to search, it does not clear the clog by pushing it forward as in the case of a toilet auger, instead, a snake holds on to the gunk, thus, pulling out the nasty gunk, which then needs to be disposed of. This could end up making the experience for most people, worse. This often takes multiple attempts before sufficient gunk is removed, to unclog the drain. The plumbing snake is more effective for other drains like that of a tub.

Using a toilet plunger is also a popular choice since it's much simpler to use, costs less money, and is available almost in any nearby store. However, the plunger tends to be a relatively weaker option when it comes to clearing the drain and there are other available options to unclog your toilet without a plunger. It may be unable to push down stubborn blockages, this is when you can switch from the plunger to a toilet auger.

We would also not suggest you to feed your toilet with baking soda and vinegar, especially when it comes to clogged toilets, despite the popular success of this process when it comes to other drain blockages such as the shower drain or drains of tubs or sinks.

We like the job that the toilet augers do and we are content with what this specially designed tool offers, so long as it keeps the plumber away from our toilets.