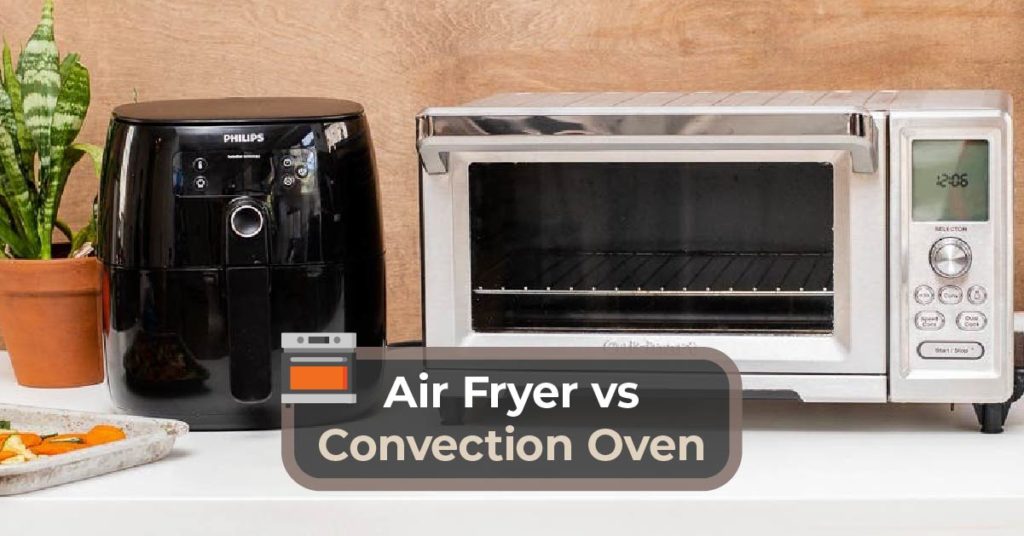 An air fryer and a convection oven are both kitchen appliances used to cook food like chicken wings, potato chips, bacon and more.

Before we discuss the differences between an air fryer and a convection oven, let’s discuss what these appliances are.

What Are the Main Differences Between An Air Fryer And A Convection Oven?

What is an air fryer? An air fryer is a kitchen appliance for cooking food with little to no oil. And it does this by circulating hot air (up to 400 F) around your food using a fan and a heating element.

Basically, an air fryer is smaller than a convection oven, and the fan (or fans that circulate superheated air faster) is positioned closer to the food. This makes air fryers produce a high amount of heat to preheat and cook food very fast.

Air fryers use a fryer basket to circulate the hot air to speed up the cooking process. These factors make an air fryer cook food faster than a convection oven.

What are the advantages of an air fryer when compared to a convection oven?

The advantages of an air fryer, when compared to a convection oven, are not so much. This is because air fryers and convection ovens are similar in their functionality and utility.

Despite these similarities between convection ovens and air fryers, there are differences between these two kitchen appliances.

Below we’ll explore the differences by highlighting the advantages of each.

Size is a major difference between an air fryer and a convection oven.

When compared to a convection oven, an air fryer is smaller, so they take up less space on the kitchen counter. The average size of a kitchen air fryer is 12.25 inches. This makes it possible to store your air fryer in a cupboard or pantry after use.

Convection ovens on the other hand are larger and similar in size and shape to toaster ovens.  The average size of a countertop convection oven is 18.5 inches wide. So they occupy more space and tend to sit permanently on the counter.

An air fryer’s smaller size means the fan is closer to the cooking area. And this makes the fan able to circulate hot air faster around the cavity than in a convection oven. Some manufacturers claim that the fan in their air fryer is 25 – 30% faster than those in convection ovens.

An air fryer contains more accessories than a convection oven. Accessories you can expect to see when you buy an air fryer includes the following:

These accessories (especially the perforated basket) help circulate the hot air in the chamber to speed up the cooking process. 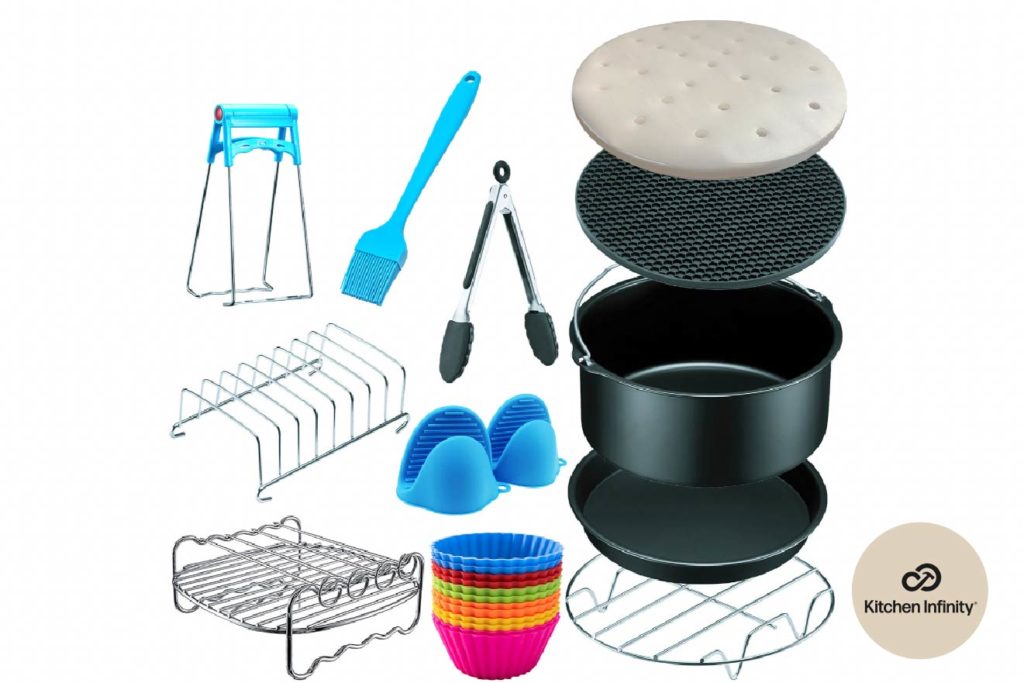 What are the advantages of a convection oven when compared to an air fryer?

The advantages of a convection oven when compared to an air fryer include the following;

Air fryers are smaller and can only preheat and cook a small amount of your food (around two servings) at a time. Typically, air fryers can only feed one or two people. So you’ll have to cook your food in batches if you’re going to feed more than two people – this also takes more of your time.

Ease of use and maintenance

Air fryers are more difficult to clean than a convection oven because air fryers have buckets and perforated baskets that make cleaning a challenge. The cleanup is even more problematic when cooking a meal that drips from soup or sauce.

For a convection oven, the cleanup is simpler than an air fryer because there is only one pan to clean.

Secondly, an air fryer runs loudly, while a convection oven is quieter. And thirdly, you can’t see the content of most air fryers, while convection ovens come with see-through glasses for you to see the food you’re cooking.

When you compare the price of an air fryer to a convection oven, an air fryer is more expensive. This is because it can cook food faster and more evenly. Air fryers can range between $50 and $500.

But a convection oven (which is cheaper) can accommodate more food at a time. Plus it can cook a wider variety of foods. Countertop convection ovens can range between $25 and $500.

Which One is more Usable in the Kitchen Between an Air Fryer and a Convection Oven?

A major difference between these two appliances is the foods they can cook. You can find more uses of an air fryer here.

What foods can you cook in an air fryer?

An air fryer can fry your usual deep-fried foods to give a  fried brown look. Here are common foods that you can cook in an air fryer unit.

As many high-end air fryers come with lots of functions, they can fry more foods than convection ovens. Some Air fryer units function as a convection oven, rotisserie, toaster oven, grill, and warmer, etc. making the air fryer multi-functional and versatile in the foods you can cook in it.

What foods can you cook in a convection oven?

Here are common foods you can cook in a convection oven;

A perk of cooking with a convection oven is that it allows for multi-rack baking.

Can an air fryer and a convection oven be paired together?

Yes, an air fryer and a convection oven can be paired together in your kitchen.

An air fryer fries food faster (and better) than a convection oven. Since an air fryer is faster, it’s more energy-efficient. A convection oven on the other hand has greater food capacity. Both appliances can be paired together to cook meals in your kitchen.

What are the instances where an air fryer and a convection oven should be used together?

If you’re cooking for a party of 8-12 people, you could simultaneously cook your potato chips, French fries, chicken wings, and mozzarella sticks in your air fryer while you cook pasta, veggies, pizzas, and cookies in your convection oven. These two appliances can be used together to allow you to utilize the speed benefit from the air fryer and the capacity benefit for the convection oven.

What are the instances where a convection oven and an air fryer should never be used together?

Also, if you have limited space in your kitchen then you should not consider owning both appliances at once. Here are the different types of air fryers that can help understand your options.

What to Consider when Buying an Air Fryer or Convection Oven

Some convection ovens or air fryers have mechanical dials, while others have digital controls.

Generally, units with digital controls are more intuitive to operate. Secondly, you can easily set the right temperature or select a pre-cook setting without guessing which cooking temperature is right for a particular recipe. Check how to use an air fryer.

Are you living alone or do you cook for a family? Your answer will determine the kind of air fryer that will suit your cooking needs.

If you cook for only one mouth, the best air fryer for you will be a compact one. But you’ll need a larger model if you cook larger meals for up to three people.

Secondly, get an air fryer that won’t take up so much space on your counter especially when you’ve got a small kitchen or cooking area.

If you don’t require any special functionality and are solely looking to air fry your food, then selecting a cheaper model is advantageous.

If you want to escape the hassle of opening your appliance to shake or flip the basket’s content, getting a paddle-type unit will be the best thing to do. The only steps include setting the air fryer, inserting the food, and letting it cook till complete.

An air fryer or convection oven with a wider temperature range will heat and brown your food faster as they reach higher temperatures quicker.

What are the Best Brands for Air Fryers?

The brands making the best air fryers are Philips, Ninja, Dash, Cosori, and GoWiseUSA. There are many brands making air fryers but not all of them make products that are actually worth your money. So we’ve put together the following list of the 5 best brands making reliable air fryers with desirable features and good reviews.

Philips made the first personal air fryer in 2010. And since then, they haven’t looked back. As the innovators of this appliance, they’ve been coming up with innovative designs and features to improve the gadget’s versatility.

And as Philips has a reputation for making quality gadgets, they’ve brought that quality to your kitchen with their top-quality air fryers. And all through the years, Philips has proven to be one of the best brands making air fryers.

However, expect a Philips air fryer to be more expensive than some of the other best brands.

While Ninja is widely known for its blenders, it is another highly-rated brand making air fryers with top quality.

Ninja air fryers produce flawlessly brown and crispy results and are easy to use. The controls are also intuitive to operate. They come in various sizes to satisfy the needs of one person or a family.

Dash is one of the best air fryer brands. Their air fryers have stylish designs. But the feature that makes them stand out is their size. They’re built to be compact to sit on a small kitchen counter without taking up much space. You can also easily store them in the cabinet or pantry after use.

Thirdly, they’re easy to operate, and their innovative Tasti-Crisp air fryers make them a customer favorite.

And finally, Dash air fryers are more affordable than the Philips brand but don’t compromise on quality.

One popularly reviewed feature of the Cosori air fryers is their range of smart air fryers that allows you to control them with voice commands using a smartphone app.

Another reliable brand making some of the best air fryers is GoWiseUSA. Their products are dependable, affordable, and large enough to feed a family. 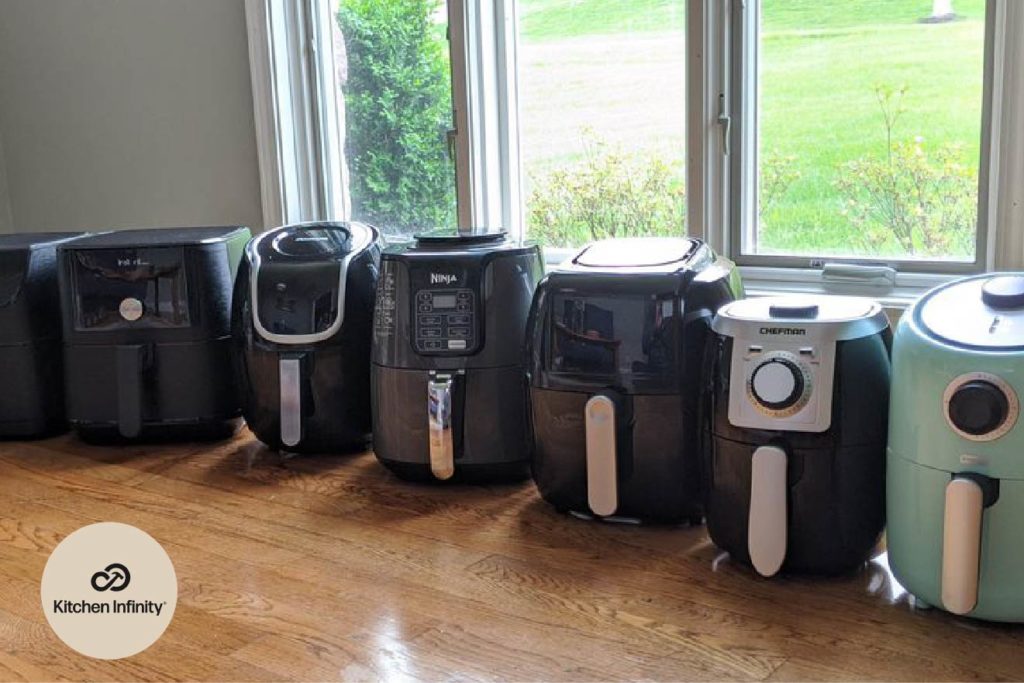 What are the Best Brands for Convection Ovens?

Cuisinart is one the best brands making both top-quality convection ovens and air fryers. Their air fryer units come with see-through glasses. And the brand has convection oven units that double as air fryers. We also like their contemporary but stylish designs.

One of the best convection oven brands is Breville. They’ve got a smart oven that we absolutely love. The model has lots of pre-cook settings and an element IQ that transfers heat evenly across the unit.

BLACK+DECKER is another brand making some of the best kitchen appliances. Their models present you with lots of cooking functions. And they allow you to cook a wide range of foods, giving them the perfect browning.

Check out our in-depth review of the best convection ovens.