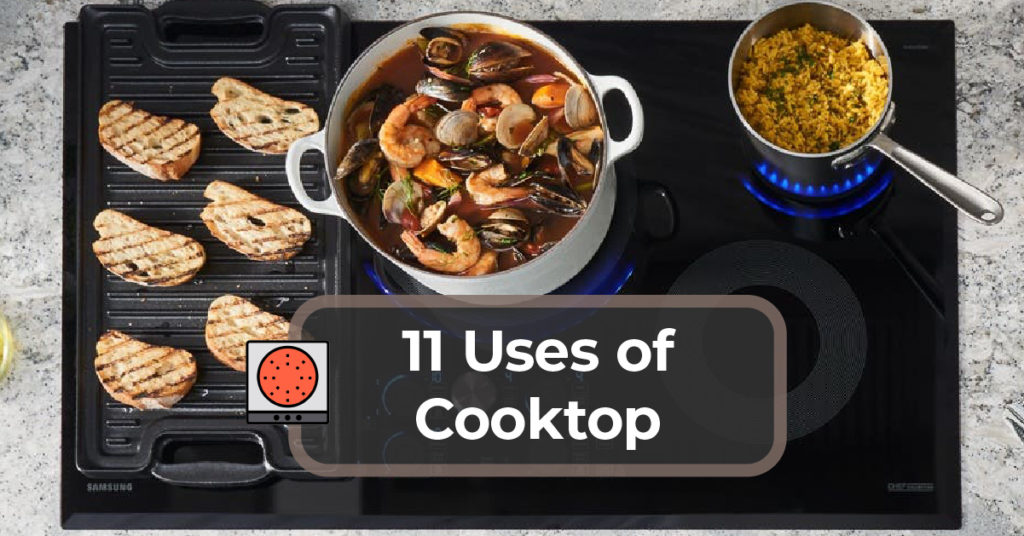 The first cooktop was developed in England in the 1820s. The cooktop is a compact kitchen appliance that can fit in any place in the kitchen. Today there are several types of cooktops that are powered by gas, electricity, and induction (cooktops that use electromagnetic coils). Cooktops can be standalone appliances or maybe built-in an oven with an exhaust system. For those with a small kitchen and no oven, a cooktop has many uses, except baking. Further, for individuals who reside in the basement, bachelor apartment, or a dorm, a cooktop is a practical cooking appliance because it is portable and lightweight.

Irrespective of the type of cooktop, it produces heat which allows it to be multifunctional in the kitchen. The best advantage of a cooktop is that it can be used to cook several dishes all at different temperatures at the same time such as simmering a stew and poaching eggs. If you’re curious about how to use a cooktop it can be used for boiling, sauteing, simmering, frying, blanching, and boiling.

Another use of a cooktop includes  cooking foods at high temperatures above 200 F. By allowing the water or oil to reach boiling temperature, this keeps the food in motion and prevents sticking. In addition, cooking quickly also prevents the sogginess of certain foods like pasta and rice. Food items are usually boiled in water but to increase the flavor, spices and a little bit of oil may be added. While any type of food can be boiled on a cooktop, the technique is best suited for grains (eg rice), pasta, and green vegetables

A third use for your cooktop includes frying foods in a pan. The cooktop allows for all types of frying including stir fry, sauteing, shallow frying, and deep-frying. All types of veggies and meat products can be fried; the process is quick and the food appears juicy and flavorful. The two downsides to frying include 1) during the cooking, oil drops may splash all over the cooktop and sidewalls and 2) there is always some residual oil leftover. To ensure that your cooktop retains its aesthetics, it is important to clean it thoroughly after each cooking session.

A fourth use of the cooktop is evaporating water, which is a very useful technique when reducing sauces and syrups. When the liquid volume is decreased, the flavors of the food and spices are concentrated.

Blanching is a fifth use of the cooktop. With this technique, the food item is briefly immersed in a hot liquid like boiling oil or water. Veggies, fruits, and nuts are foods most frequently blanched for a variety of reasons that include softening the food, loosening the surface layer skin to make peeling easy, or to brighten the color of the food. Different foods require different blanching times but in most cases, the duration is usually less than 60 seconds. When certain veggies (carrots, green beans, asparagus) are blanched, it can intensify the colors and at the same time retain their flavor.

A sixth use of the cooktop is Saute; with this technique foods are fried using a small amount of oil. Sauteing allows the food to be coated with a thin coat of oil which is then cooked by the transfer of heat to the pan. The sauteing prevents food from sticking to the pan and also helps with heat conduction. The result is browning of the surface of the vegetables or meat. However, for sauteing to work, the food has to be finely chopped or diced so that it can be cooked rapidly thus preserving the flavor, texture, and moisture.

A seventh use of the cooktop is Poaching. With this method, the food is submerged in a liquid such as milk, water, or wine. But what differentiates it from boiling and simmering is that the cooking utilizes a relatively low temperature (155-175 F). Poaching is best used for delicate foods like fish, eggs, certain fruits, and white meat chicken. Poaching is considered to be a healthy way of cooking because liquids and fat conduct the heat into the food.

Simmering is the eighth use of cooking on a cooktop. The key difference between boiling and simmering is that the latter is a slow and gentle process, but a little bit more aggressive than poaching. During simmering, the food is cooked in the liquid which is set at a temperature just below the boiling point (usually less than 200F). Unlike boiling, one has to continuously monitor the simmering process to ensure that it doesn't get to the boiling phase. Simmering is a great way to make soups, stocks, and starchy items like pasta, potatoes, grains, and legumes. Simmering allows the food to remain tender and soft because there is a gentle mixing of all the spices and liquid.

The ninth way a cooktop can be used is to keep foods warm. Because most cooktops have low settings, the warming can be done without burning the food. The latest cooktops also come with timers that allow the appliance to keep the food warm for a defined number of minutes.

Finally the last use of a cooktop is the generation of heat, especially when the home furnace has broken down. The cooktop will generate enough heat to keep one room warm during a cold day. However, this is a last resort use of the cooktop for heat as it is not efficient nor cheap; the cooktop was never designed to warm up a home. 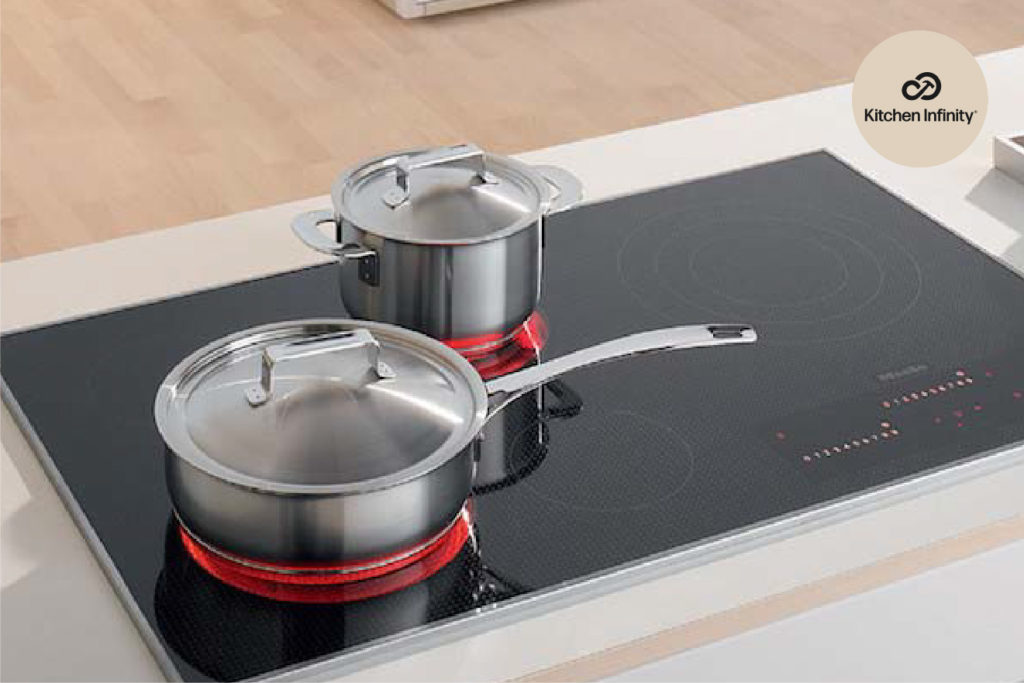 What are the common mistakes for the usage of a cooktop?

Common mistakes for the usage of a cooktop involve boiling, simmering, sauteing, and poaching foods. Each of these cooking techniques is used for different foods. Common mistakes made with the cooktop include the following:

Cooktops are convenient and easy to use but to maintain longevity, you will also need to use the appliance as directed and keep it clean. Always unplug the cooktop when you decide to clean it

What is the history of usage of a cooktop?

The history of cooktop usage dates back to 1802 when  the first gas-powered cooktop was manufactured in Leicester, England. Commercial gas stoves did not appear on the market till the 1830s. However, by the end of the century cooktops had become common in many parts of the UK, because they were easier to regulate and required significantly less work than coal or wood stoves. Around the 1890s, home electricity appeared and the first electrical powered cooktop appeared on the market in 1892. As electricity became common in society, so did electrical cooktops. Then in 1946, Percy Spencer, an engineer for Raytheon Corporation developed a rudimentary cooktop that used microwave radiation. Eight years later, the company went on to make the first microwave. This led to the study of electromagnetic energy and soon the first generation of induction cooktops were developed. But they were fraught with technical issues. As technology improved, so did the production of cooktops and by the 1980s, cooktops were readily available and found in most homes. However, induction cooktops did not become common until the late 90s.

Do the use cases of a cooktop change based on type?

Yes, the use cases of a cooktop change depending on the type of cooktop. While all cooktops produce heat from a coil, the use cases differ depending on the heat setting. For example, boiling water requires a higher setting and is suitable for boiling eggs, but a low simmer is needed to make a broth or soup. In addition, the time needed to cook also varies depending on the food type. For example for blanching, the exposure to the hot liquid is usually less than 60 seconds, whereas evaporation of water to make a thick syrup may require 5-10 minutes

Which cooktop is best for cooking chicken?

The best cooktop for cooking chicken is the Karinear Tempered Glass Gas Cooktop, Drop-in 24 Inches Gas Cooktop. This stylish tempered glass cooktop has 4 burner gas surfaces for cooking, that have dials for varying the amount of heat. The cooktop allows for easy simmering and boiling of chicken in small batches. Almost any part of the chicken can be cooked to the desired tenderness with the different settings of heat. More importantly, this cooktop is easy to clean and has a durable surface. The glass surface is anti-rust and resistant to high temperatures- hence injuries are less likely.

Does a cooktop have more use cases than a convection oven?

Yes a cooktop does have more use cases than a convection. However the answer around the cooktop vs convection oven debate is not straight forward as both appliances have their specific use cases. The cooktop is more versatile and allows for cooking food in many ways but at the same time, the convection oven also allows food to be cooked in several ways including baking, heating, roasting, broiling, and steaming. Neither appliance can be replaced by the other because they both have different functions. For example for boiling and simmering foods, the cooktop stands tall but for baking and roasting, the convection oven is far superior. In fact, today cooktops are often incorporated into convection ovens as a single unit.

What are the other kitchen tools with various use cases similar to the cooktop?

Kitchen appliances with case uses similar to cooktop include:

Each of the above appliances has its role in the kitchen but overall, the cooktop is more versatile than a convection oven because it has 2.5x the functionality, simple to use and easier to clean because it has fewer parts. 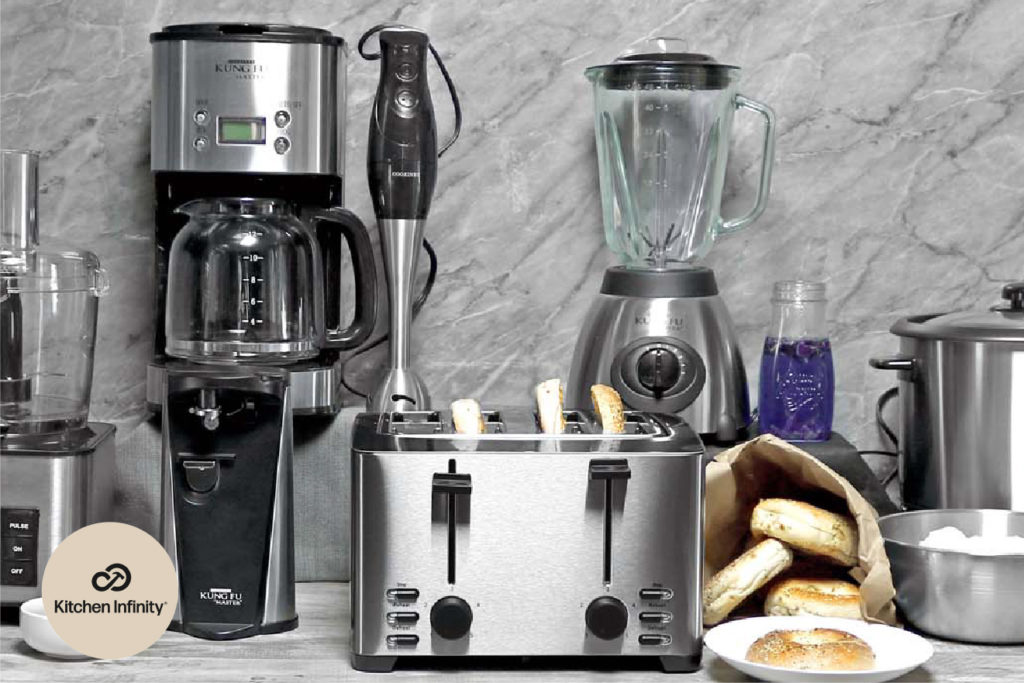