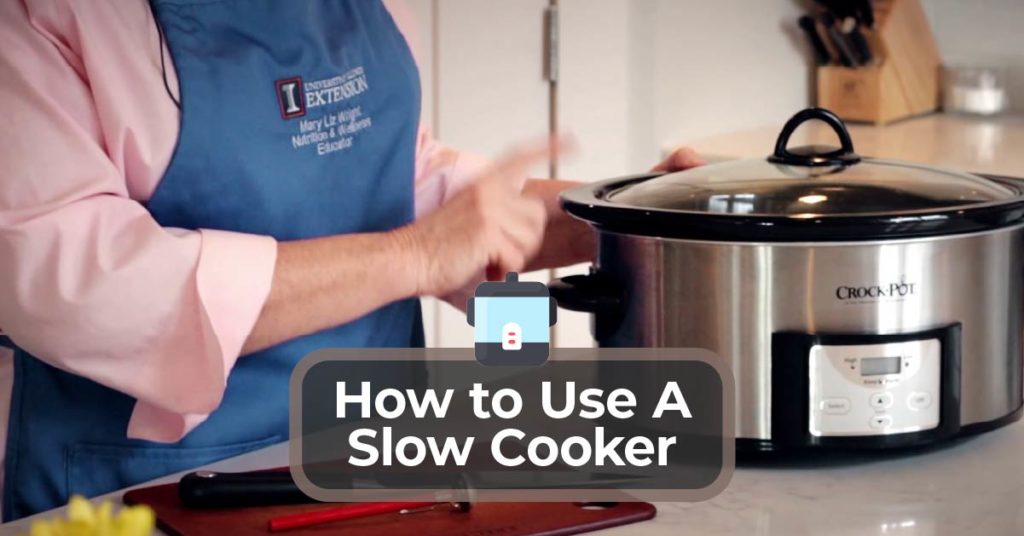 Using a slow cooker involves the following steps – preparing your ingredients, placing ingredients inside the slow cooker, closing the lid, choosing the appropriate setting, and waiting for the process to end.

A slow cooker is a simple and popular small kitchen appliance that can be used to cook a wide variety of food. If you would like to learn more about how to work a slow-cooker, refer to our detailed slow-cooker use guide below.

The most time-consuming part of using a slow-cooker is preparing the ingredients. In some instances, this can take just a few minutes while in other cases it can take upwards of 15 minutes.

When preparing your ingredients, there are a few things to keep in mind. First off, because slow-cookers are designed to cook food over 6 hours or more, most people prefer to cut their ingredients into larger chunks. This is especially true when it comes to making stews and soups.

Moreover, when cooking beef, it’s a good idea to lightly brown the meat in a skillet before placing it in the slow-cooker. Doing this increases the flavor and can help thicken the broth without using flour or cornstarch.

Finally, don’t overfill the slow cooker, as this can lead to an inconsistent cook and significantly increase the cook time. A good rule of thumb to follow is to never fill the slow-cooker more than 2/3rds of the way full.

Hard vegetables like carrots and potatoes are typically placed towards the bottom and meat is most often placed in the middle. Not only does this ensure an even cook, but it allows the juices from the meat to drip down and flavor the vegetables.

Don’t add more water than you need. If overfill the slow-cooker with water, it will create excess heat that will result in steam. When the steam comes into contact with the closed lid, condensation will form. This condensation will turn to water and fall back into the slow cooker pot and surrounding areas. Not only can this cause a mess, but it can make whatever it is your cooking watery.

The number of available settings can differ greatly from one model to the next. Some slow cookers will employ a simple low, medium, and high setting panel while others will be much more in-depth, with different options for soups, steaming, and more.

Most recipes will call for the medium or high setting. That said, any heat above 165 F (74 C) is more than enough to kill bacteria, meaning if you have the time, the slow setting is the best option for extracting flavors.

Most slow cookers will require between 4 and 8 hours to finish cooking. Remember, over-cooking is very much a possibility, so do perform periodic checks.

Now that you’ve filled the slow cooker with ingredients and chosen the appropriate setting, the only thing left to do is hit start and wait.

As mentioned above, a slow cooker can take anywhere from 4 – 8 to finish cooking depending upon what recipe you’re using. 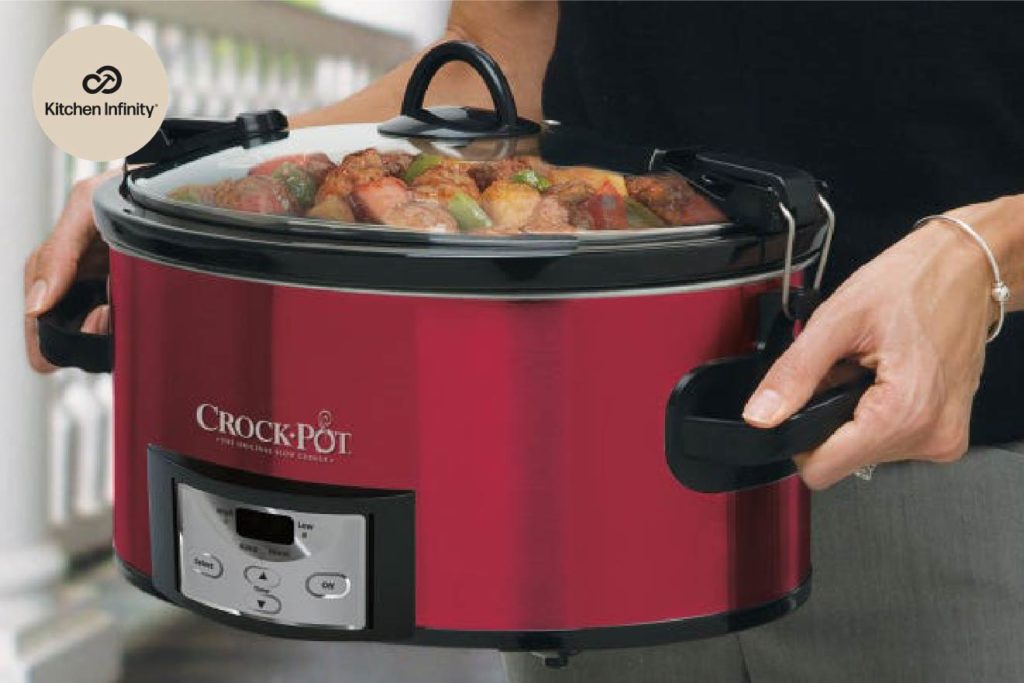 What Should I Know Before Using A Slow Cooker

What is a slow cooker? A slow cooker is a small kitchen appliance used to cook food for several hours. The cooking pots are typically made from ceramic, metal, and occasionally porcelain. The average slow cooker has a total capacity of 6 quarts (6.8 liters) and comes equipped with 240 watts/120 volts.

A 6-quart capacity is enough to make 7 generous servings of food or cook a 6-pound roast. The standard max/min cook time ranges from 30 minutes to 20 hours.

What Are The Stages Of Using A Slow Cooker

Using a rice cooker can be broken down into the following stages:

Does The Slow Cooker Types Affect The Usage Stages

No, the slow cooker type does not affect the usage stages. However, some of the best slow cookers often come with additional, more advanced settings. It’s also worth noting that porcelain cook pots produce a better, more even cook than stainless steel pots.

Yes, using a slow cooker for beef stew is better than using a dutch oven. Dutch ovens can be thought of as the original slow cooker and are large-bodied pots that are safe to use on gas, electric, and induction cooktops.

Although many people consider slow cookers to be easier to use, dutch ovens are more versatile. Not only can they be used to cook stews and roasts, but they can also be used to bake bread, create a pasta sauce, and much more.

When it comes to the question of a slow cooker vs. dutch oven, there is no clear winner and the choice comes down to personal preference.

Yes, a slow cooker for chicken is better than using an air fryer. While an air fryer is an excellent healthy alternative to frying food, the slow cooker will produce a fuller flavor.

Of course, if you’re specifically after fried chicken, a slow cooker will never reach high enough temperatures to fry food. In this case, an air fryer is better than a slow cooker.

Moreover, ceramic is unreactive under heat and comes free of nasty chemicals that can leach into your food. Although aluminum cookware is generally safe, there is some debate over whether or not long term long term use can cause health problems.

Finally, aluminum cookware shouldn’t be used with acidic foods like seafood and red meat as  doing so can ruin the aluminum. When comparing the different types of slow cookers, ceramic cookers are superior to aluminum cookers.

Slow cookers can be used for a variety of functions besides making soups and stews. To learn more about the different uses of slow cookers, refer to the sections below.

How to Use A Slow Cooker As A Smoker

To use the slow cooker as a smoker, follow these steps:

How To Use A Slow Cooker As An Oven

Slow cookers cannot be used as an oven. Ovens come with several settings that change how heat is applied to whatever it is you’re cooking. Examples include top heat, low heat, and broil.

By contrast, slow cookers don’t have this option. That said, slow cookers can be used to cook many of the same foods you can cook in an oven, including roasts, vegetables, fish, and more. 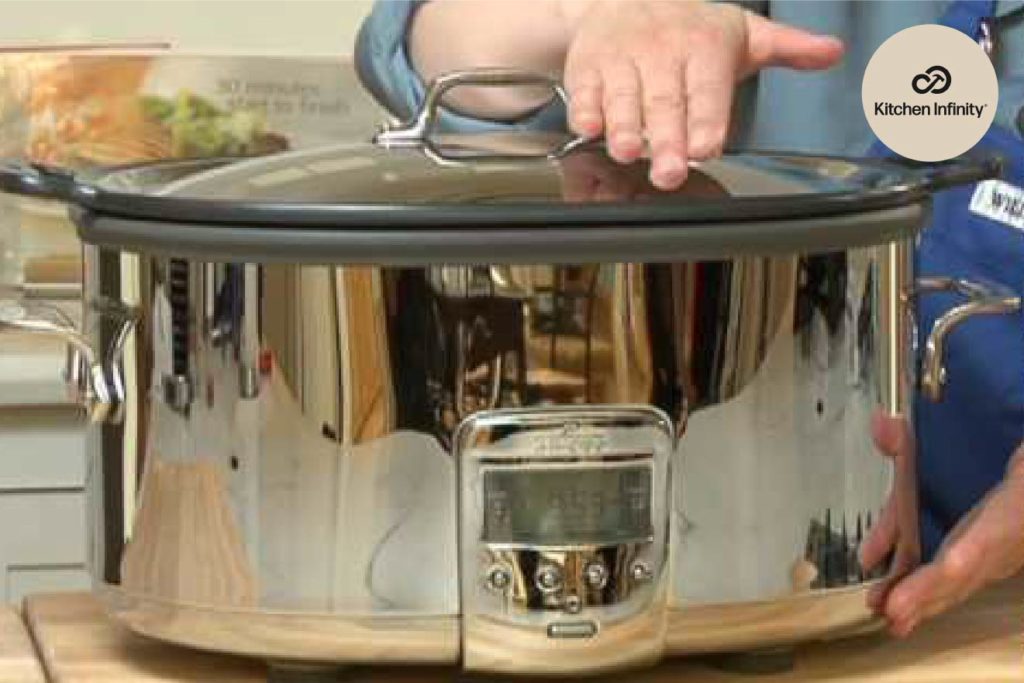 How to Use A Slow Cooker As A Dehydrator

Slow cookers can’t be used as a dehydrator because slow cookers cannot be used to dry cook. Additionally, slow cookers have too much circulating heat meaning the fruits/vegetables you plan on dehydrating will likely cook instead of dehydrate.

If you don’t want to buy a dehydrator, an oven set to the lowest temperature setting can be used to dehydrate some foods.