How to Use a Soda Maker | Helpful Soda Maker Instructions & Directions 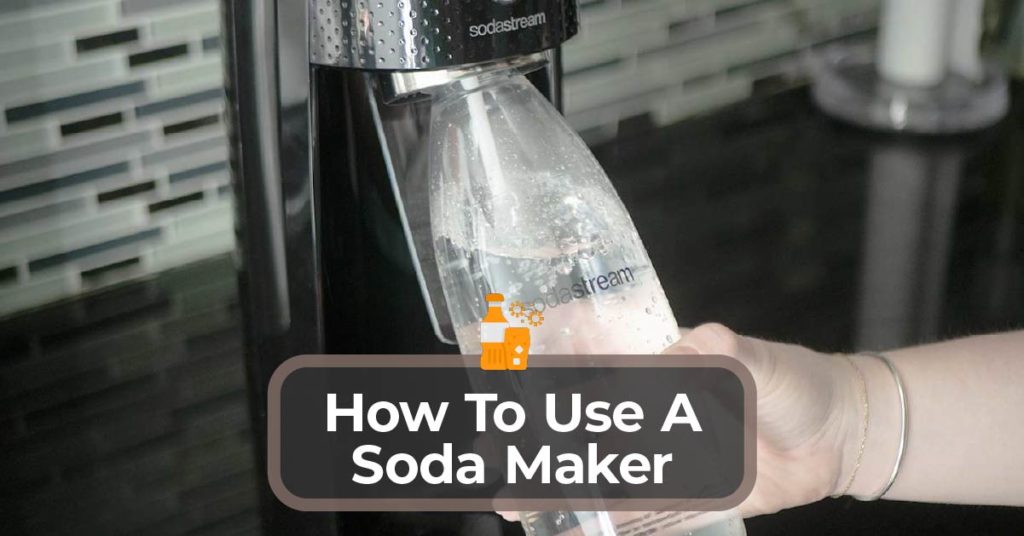 Using a soda maker involves the following steps – set the soda machine on a seedy surface, load the CO2 carbonator, fill the water bottle with water, lock the water bottle into place, and press start.

Soda makers are small kitchen appliances used to produce carbonated water. If you would like to learn more about how to work a soda make, refer to our detailed soda maker use guide below. It contains everything you need to know and more.

1. Place The Soda Maker On A Sturdy Surface

The first step to using a soda maker involves placing the small appliance on a steady surface. In most cases, this will be the kitchen counter or dining room table.

Soda makers work by infusing water with CO2 gas. To do this, you’ll need to insert a CO2 canister into the machine. On some models, the CO2 canister is a long tube that must be inserted by removing the back of the appliance and popping the canister in place.

On other models, (like a Soda Stream), the CO2 canister is much smaller and is inserted into the top of the appliance. This model has become more popular over the years as the small CO2 canisters are easier to replace and are more readily available.

A single CO2 canister will be good for several uses, meaning you don’t have to repeat this step every time you use the Soda Maker, just when the CO2 runs out.

Nearly all soda makers come with a water bottle designed to fit perfectly with the device. These bottles typically snap or screw into place. While some models will work with any water bottle, it’s a good practice to always use the bottle that came with the device.

Now that the CO2 canister is in place, fill the bottle with water and lock it in place. When filling your water bottle, check to see if it has a fill line. If it does, don’t go beyond this line. When you introduce gas into the bottle, you’re increasing the amount of volume contained within the bottle.

If there isn’t sufficient space, the introduction of gas can cause the bottle to come disconnected from the soda maker, which can result in spillage.

Some soda makers have a button on the top that, when held down, releases CO2 into the water. On other models, the button comes in the form of a trigger, which when held, produces the same result.

Knowing how long to hold the button can be a bit of a learning curve as everyone's preferred carbonation level is slightly different. Some makes/models use an LED display that tells you what level of carbonation you’ve reached.

These displays usually show light fizz, medium fizz, and strong fizz. If you’re hoping to produce the type of Soda water you’d find in a can, a medium or strong fizz is recommended.

When the desired level of carbonation has been reached, simply disconnect the bottle. At this point, you have a fresh batch of soda water to enjoy.

If you wish to add flavoring to your soda, now would be the time. To do so, remove the water bottle lid, tilt it to a 45-degree angle, and squeeze a few drops of lemon, lime, or your preferred flavor mix into the bottle.

When done, replace the cap, and give the bottle a mix by lightly rotating the bottom of the bottle.

What Should I Know Before Using A Soda Maker

What is a soda maker? Soda makers are small kitchen appliances that use CO2 to carbonate water. Popular manufacturers include SodaStream, DrinkMate, and Sodaology.

Soda makers have risen in popularity over the years as more people are looking for healthy alternatives to traditional carbonated soft drinks. Soda makers have also become popular among alcohol enthusiasts as the device can help produce a high quality mixed drink. 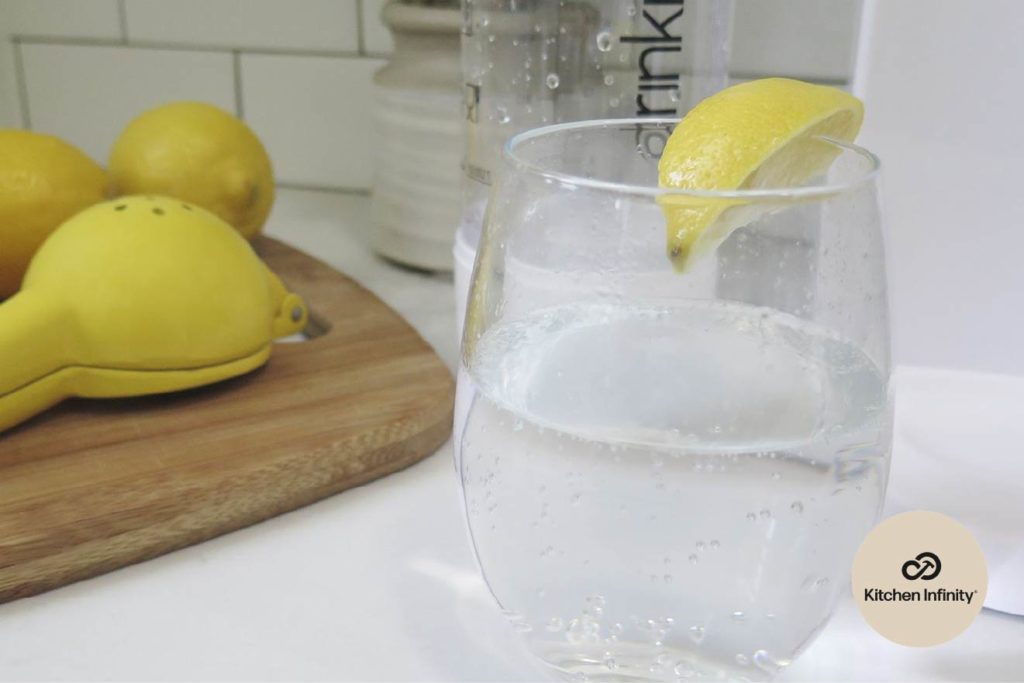 What Are The Stages Of Using A Soda Maker?

Using a soda maker can be broken down into 3 main stages:

Does The Soda Maker Type Affect The Usage Stages?

No, the soda maker type doesn’t affect the usage stages. As discussed earlier, the primary difference between the different types of soda makers is the size of the CO2 canister they receive.

Moreover, some soda makers use larger water bottles than others. Once again, this doesn’t affect the usage stages.

That said, some of the best soda makers will use lights or a display screen that tells you what level of carbonation you’ve reached.

Is Using A Soda Maker For Hot Chocolate Better Than Using A Coffee Maker?

No, using a soda maker for hot chocolate is not better than using a coffee maker. Soda makers are only used for adding carbonation to water and they don’t have a heating mechanism.

When it comes to the question of soda maker vs. coffee maker for making hot chocolate, there’s no competition – the coffee maker is the winner.

Is Using A Soda Maker For Carbonated Water Better Than Using A Bar Fountain?

In a commercial environment, such as a bar or restaurant, a bar fountain is the better option. Not only can they produce carbonated water on demand without filling up a water bottle, but the gas canisters are much larger, meaning they can produce a greater volume of carbonated water at once.

CO2 soda water, on the other hand, is any water that’s being infused with carbon dioxide gasses. All types of soda makers are capable of making both CO2 soda water and Seltzer water.

Soda makers are not versatile small appliances and their application is limited to carbonating water. Still, if you would like to learn more about the different uses of soda makers, refer to the sections below.

How To Use A Soda Maker As A Water Purifier

How To Use A Soda Maker As A Cleaning Alternative

To use a soda maker for cleaning, follow these steps:

Because of the carbonation, soda water can function as a chemical-free cleaning solution. When cleaning bathroom or kitchen surfaces, some people choose to add fresh lemon juice to the soda water for its antibacterial properties.

Soda water can also be useful in cleaning rust off of cast iron. The bubbling action of the soda water helps separate and bubble the rust away.

How To Use A Soda Maker As An Ice Pop Maker

To use a soda maker as an ice pop maker, follow these steps 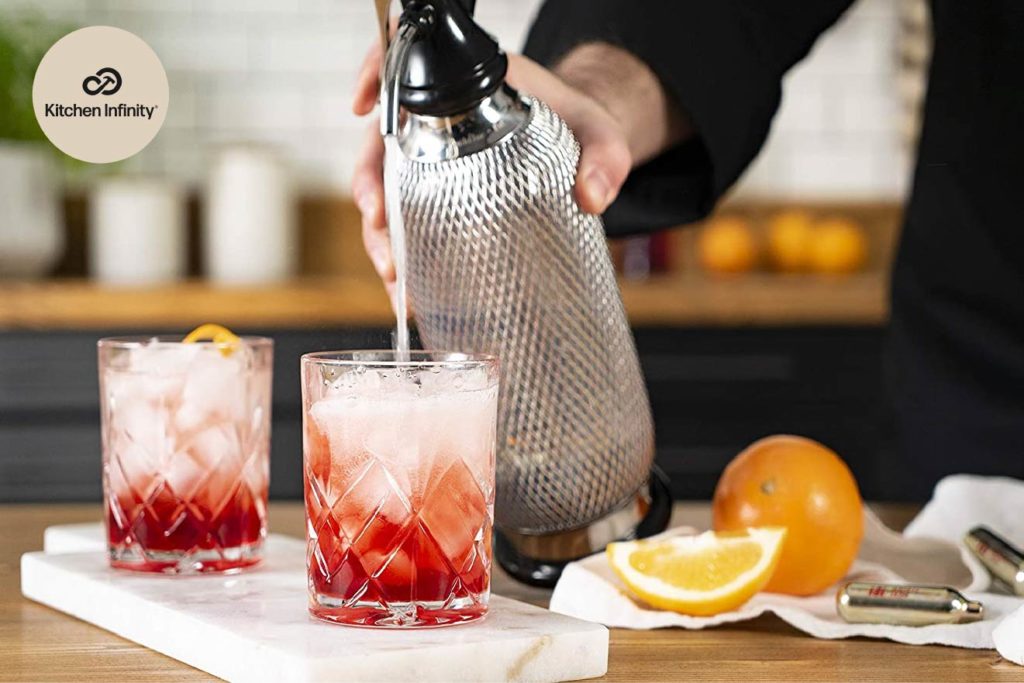