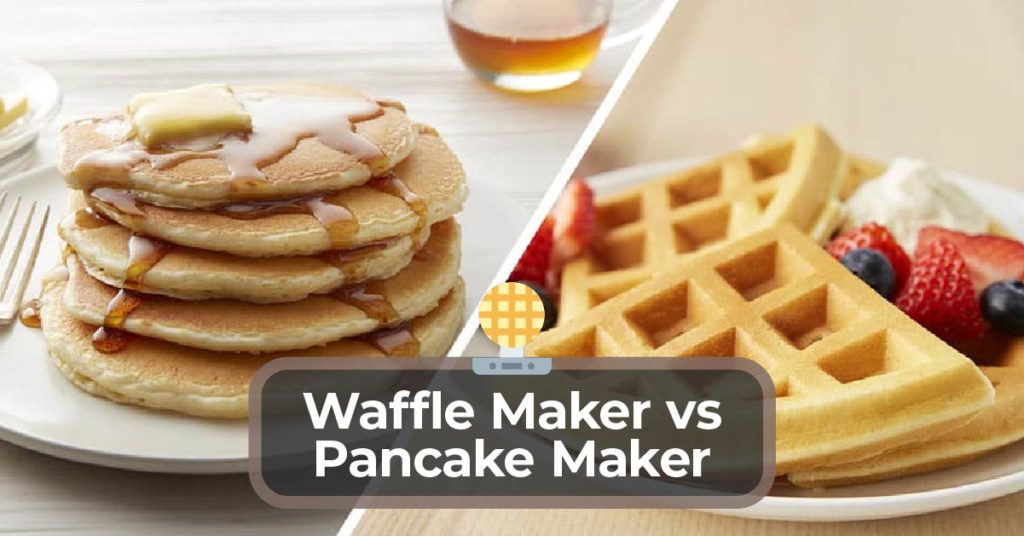 Waffle makers and pancake makers are some of the most widely used appliances in homes today.

While they’re both used in making a variety of foods, their primary function is making our tantalizing waffles and pancakes. And this is where their difference lies – hence the need for the waffle maker vs pancake maker debate.

To know which of these appliances will be great for making your breakfast, we’ll explore the pancake maker vs waffle maker debate.

Let’s find out the differences between a waffle maker and a pancake maker.

What Are the Main Differences Between A Waffle Maker and A Pancake Maker?

The main difference between a waffle maker and a pancake maker is in their design.

Waffle makers are kitchen appliances with two patterned iron plates that compress waffle batter and give it a characteristic shape, while a pancake maker has a flat surface for cooking pancake batter so they come out fluffy.

What is a waffle maker? A waffle maker, also called a waffle iron, is a kitchen tool with two metal plates for making waffles. These iron plates have a honeycomb or grid pattern that you can pour your waffle batter or dough into and heat it. The batter or dough then takes the shape of the grid, resulting in your browned, crispy waffle.

Both the cooking method and design pattern of waffle makers make waffles cook evenly, resulting in properly caramelized, sweeter-tasting, and less fluffy, crunchy waffles. This is also responsible for the lighter texture of waffles when compared to pancakes.

What is a pancake maker? A pancake maker, also called a griddle, is a countertop appliance with a smooth flat non-stick surface like a hibachi grill. It is used for making pancakes, flatbreads, and crepes.

Because of the flat design of pancake makers, they cook pancakes that are fluffy on the inside and caramelized at the top. This cooking method is also a top reason why pancakes taste differently from waffles.

What are the advantages of a waffle maker over a pancake maker?

The advantages of a waffle maker, when compared to a pancake maker, are that it’s a countertop appliance that’s best for baking evenly browned waffles in speed time.

Waffles makers are made of iron plates designed in the form of a grid, and this gives waffles their characteristic shape. Also, this is responsible for the sweeter taste and lighter texture of waffles, giving you and your household a delicious breakfast.

Despite waffle and pancake batters comprising the same ingredients, pancake makers are not ideal for baking waffles because of their flat surface design.

When compared to pancake makers, waffle makers bake waffle batter faster. You can get your fully baked waffles in as little as 4 to 5 minutes while it will take a pancake maker about 10 minutes to cook your pancake.

Also, waffle makers are known for yielding browner and more evenly cooked results. This is also due to their design as the hot metal grid heat both the top and inside of the waffles.

What are the advantages of a pancake maker over a waffle maker?

The advantages of a pancake maker, when compared to a waffle maker, are that it’s a versatile, affordable appliance that is best for cooking pancakes while being easier to clean.

While pancakes and waffles are made using the same recipe, the best appliance for cooking pancakes is a pancake maker because of its construction. The honeycomb design of a waffle iron makes it not suitable for cooking flat foods like pancakes and flat bread.

When compared to a waffle maker, a pancake maker offers better versatility because of its flat design.

Waffle makers have grid-like patterns which make them not suitable for cooking other foods that are expected to come out flat. Pancake makers, on the other hand, have flat surfaces that make them great for cooking flat foods such as crepes, pancakes, and flat bread. Consequently, you can use your griddle to cook any meal that you can cook in your pan.

When compared to a waffler maker, pancake griddles are easier to clean.

This is because pancake makers have a flat continuous non-stick surface that makes it easy to wipe grease off. Even for those that don’t have non-stick surfaces, they’re also easy to clean as you can easily toss them in the dishwasher (if they're detachable).

Waffle makers, on the other hand, are a bit more difficult to clean than griddles because of their patterned surface. 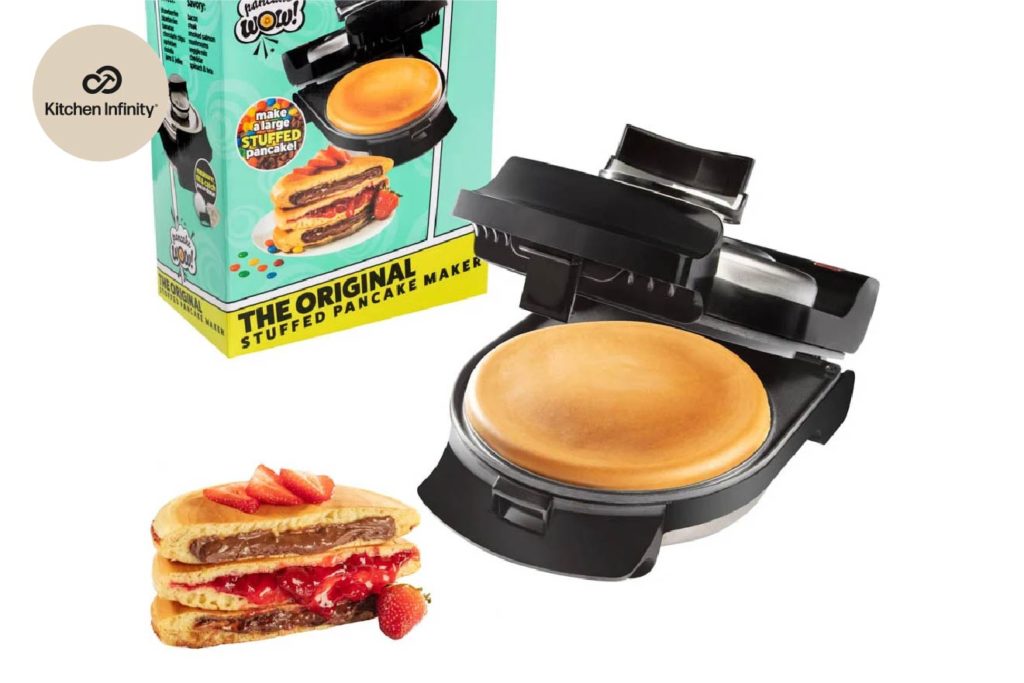 Which One is more Usable in the Kitchen between A Waffle Maker and A Pancake Maker?

Pancake makers are more versatile in the kitchen than waffle makers. This is because pancake makers are not only great at baking pancakes, but they’re also great at baking crepes, flat bread, and other foods that you can cook in a fry pan. Conversely, the construction of waffle makers makes them able to cook fewer foods such as omelets, waffles, pizza, and grilled cheese, etc.

And if you’re asking, “Is a waffle maker the same as a pancake maker?” No, they’re different appliances.

What foods can you cook in a waffle maker?

While waffle makers are better suited to baking waffles, they’re used in cooking other foods because of the texture of the results they yield.

Here are some of the different waffles and foods you can cook with a waffle iron;

Here are the other uses of a waffle maker.

What foods can you cook in a pancake maker?

The pancake maker is so versatile that it can cook anything that you’d normally cook in a frying pan. Here are a few of the items you can cook in

Can a waffle maker and a pancake maker be paired together in a kitchen?

Yes, you can pair a waffle maker and a pancake maker in your kitchen.

Waffle makers are better suited to baking waffles while pancake makers are great for making pancakes and crepes.

What are the instances where you can use a waffle maker and a pancake maker?

Both waffle makers and pancake makers are great for making healthy meals, but the latter is more versatile. So you can use a pancake maker to sear meat or sauté vegetables as you bake some waffles with your waffle maker.

What are the instances where a pancake maker and a waffle maker should never be used?

You should not use a waffle maker and pancake maker when baking pancakes. Both waffles and pancakes can be made using the same ingredients, but one major factor responsible for the difference in results is the tool used in making them. If you pour your pancake batter into your waffle maker, it’ll come out as waffles.

What to Consider when Buying A Waffle Maker and A Pancake Maker?

Should you get a waffle maker or a pancake maker to bake your delicious breakfast? These are the top factors you should consider before getting either or both of these appliances.

What type of appliance should I get?

A stovetop waffle maker is a compact waffle iron that gets its source of heat from a stove or another external source. And it requires you to flip it during the cooking process. But because it doesn't require any source of electricity, it's great for taking on camping trips.

Electric waffle makers are easy to use as the whole process is automated. Also, they take a shorter time to cook waffles than stovetop models.

Commercial pancake makers are heavy-duty pancake makers that are designed to be used in commercial establishments such as restaurants and breakfast bars. You can get them in electric or gas models.

Automatic pancake makers are also heavy-duty appliances that are designed for industrial use such as in manufacturing products, rather than commercial use.

Electric pancake makers are the most popular pancake makers. They’re ideal for domestic purposes as they’re energy-efficient and their compact sizes make them great for countertop use.

And finally, gas pancake makers are great for outdoors as you’ll have to connect the appliance to a gas supply, which may not be a practical solution for indoor use. However, they heat up faster than electric models.

If you enjoy snacking on fluffy waffles, you should get a Belgian waffle maker as they make waffles that are fluffy in the middle and crispy outside. But if you prefer thinner waffles, a classic waffle maker will be a better option for you.

What are the best plate materials?

What size of the appliance will be compatible with my countertop?

If you have a small kitchen or countertop space, a single waffle iron may be a better option for you as a double model may take up too much space. Also, a vertical waffle maker takes up less space. The same also applies to pancake makers, if you want to make many pancakes, a double pancake maker will serve you better but if you have a small countertop space, you can make do with a single model.

How much should I spend on these appliances?

A waffle iron costs between $10 and $300, but you can get a durable and quality model for less than $100. And you can expect to pay up to $30 or $50 for a good griddle. But if you desire more accessories and high-end features, expect to pay higher. 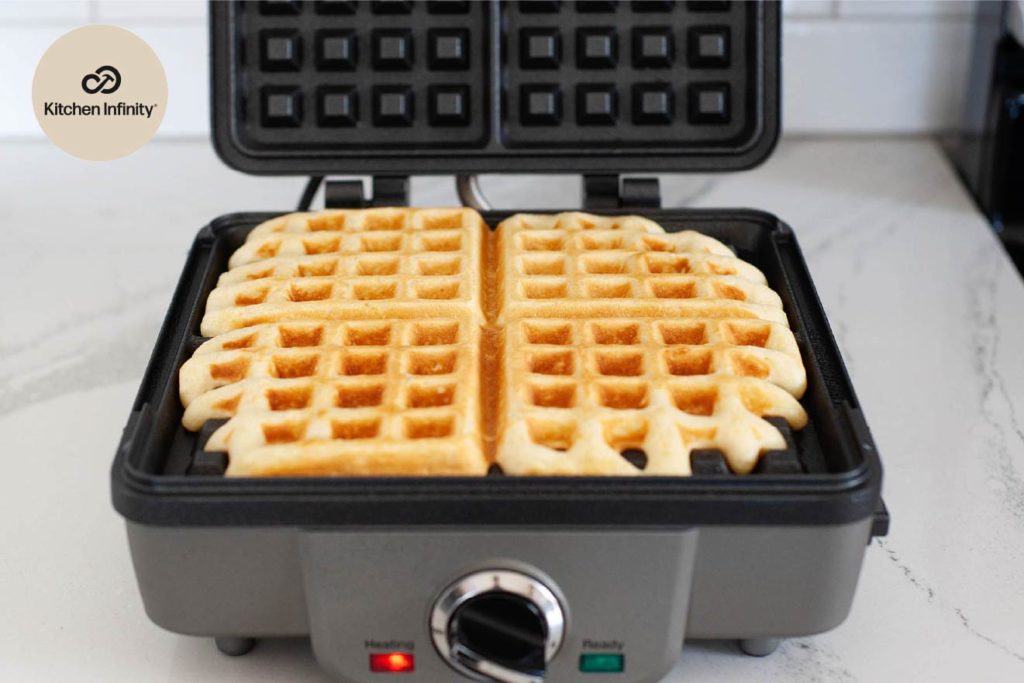 What Are the Best Brands for Waffle Makers?

Cuisinart is our top pick for the best brand making the best waffle maker. The brand has got some of the best classic and Belgian waffle irons. They are easy to use, maintain, and are durable. And they come at affordable prices.

Another brand making some of the best budget-friendly waffle makers is Hamilton Beach. Some of their models have the capacity to bake two waffles at a time. And their results are crispy on the outside and fluffy inside. And they can make Belgian-style waffles and classic waffles.

Dash is also one of the most reputable names making some of the best waffle makers, and the Dash Mini is one of the most popular waffle makers on Amazon. The compact design of the waffle iron makes it suitable for small kitchens, dorm rooms, and RVs. It’s affordable and comes with non-stick plates that make it easy to pour your food.

Breville is one of the top brands making some of the best kitchen appliances. They have both mid-priced and high-end waffle makers. Their models are known for heating up very fast and making evenly browned waffles. You can get any of their Belgian and classic waffle makers which have multiple browning settings.

Another popular brand making some of the best kitchen appliances is All-Clad. Their waffle irons are mid-priced and they’ve also got pricier models. Their waffle irons evenly brown waffles, making them crisp on the outside and fluffy inside to give you a delicious breakfast.

What Are the Best Brands for Pancake Makers?