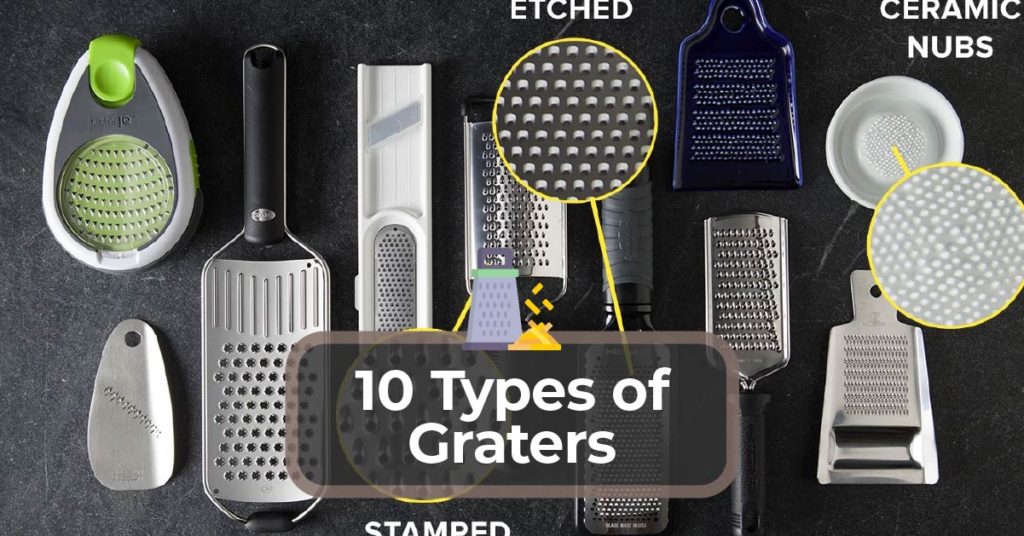 A stainless steel hand grater is not the only type of grater. There are other materials used to make graters besides stainless steel. Graters are made from plastic and wood too. In addition to the grater material, there are different shapes of graters such as box graters, hand graters, electric graters, microplane graters and more.  The materials and shape play an important role in deciding what type of grater is needed for your kitchen.

Choosing the right material for your grater depends on the type of food you will be grating, how often you will grate, and what your preferences are.

What different types are available for a grater?

Grater types are categorized as a kitchen tool with a perforated surface and sharp edges. Standard graters will have multiple holes of different shapes and sizes. The shape is flat with one side more coarse than the other for shredding foods into smaller pieces or strips. There are many types of graters made to perform specific tasks. Each grater type will vary in design compared to the standard grater form. Certain grater types include multi-purpose tools that combine multiple functions into one kitchen device.

The following are the types of graters available on the market:

What are the different ways to use a grater?

What sizes do the graters come in?

The dimensions of a grater are important but so is the radius of the holes. The holes affect how fine or coarse the food will end up after the grating process. If the cook uses a grater for hard cheese, then selecting a box type grater with medium-sized holes is effective for shredding raw vegetables such as carrots and zucchini without pulverizing them entirely.

The handle design should be taken into consideration. The handle is built to be comfortable against your hand while having an easy grip. It should be able to stand freely on a flat surface while grating.

When it comes to size and usage, consider a zester if you need to make fine zest, a grater plate if you need flat pieces of mostly soft foods such as cheese or vegetables for soups, and a microplane rasp grater is easier at getting chocolate off the block.

For effortless cleaning, look for dishwasher-safe stainless steel or plastic graters.. Regardless of size, graters made from wood materials becomes more challenging to clean using water and soap because the food particulares get stuck inside the wood cracks. 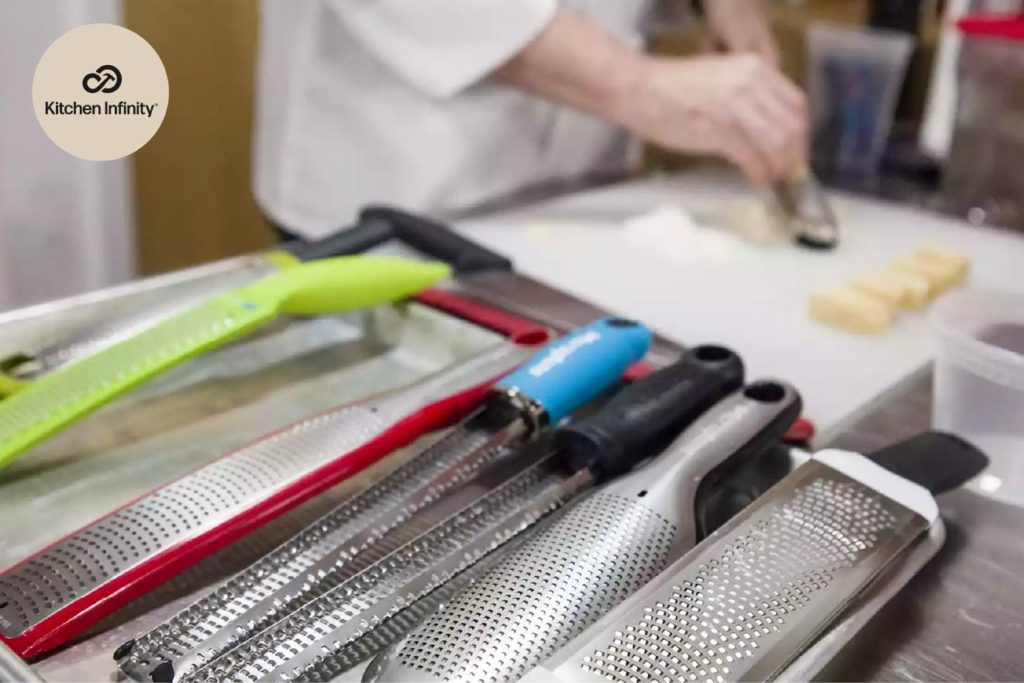 What food can I prepare for different graters?

Food that can be prepared with a grater is defined as any food that can be sliced, grated or shredded. Some examples of food that are ideal to prepare using a grater are cheese which is used for fondue, chocolate chips which are made using the microplane rasp grater, nutmeg which is best prepared with a zester, and vegetables such as carrots and cabbage which can be cut into ribbons using a julienne slicer.

Different food that can be prepared with each grater type are listed below:

What determines the best grater material?

The best grater material is determined by the food you intend to grate or slice. If you are looking for a grater that will work on both hard and soft foods, then look for one made out of stainless steel. It is stronger than plastic so it can handle tougher foods while having the same smooth surface as plastic ones which doesn't leave shreds of food stuck in its crevices.

On the other hand, if you are looking for a grater that will work well only with softer foods, then choose one made out of plastic. This type of grater has fine holes which makes it easy to grate cheese, vegetables, and chocolate.

A stainless steel grater can also be used to grate hard foods such as potatoes but the results may not be as satisfactory compared to using other types of graters.

If your objective is to have more control over your food while preparing them, then look for a wooden grater that enables you to “feel” the food better than other types of utensils especially when they are cold.

Yes, metal graters are safe because you can control how fine or coarse you want the food to be by applying more pressure when grating.

If you choose a grater made out of stainless steel, you should avoid using this grater on foods with hard interiors such as potatoes because it will shred the hard food instead of grating. Also important to note for safety concern, metal grater types may contain harmful chemicals like chromium and nickel which are best removed by soaking them in lukewarm water before using them to avoid getting these toxins into your food.

Compared to plastic graters and wooden graters, metal graters are not as safe due to their sharp blades. This can be dangerous especially when the chef accidentally cuts themself while trying to grate foods with hard interiors like potatoes or parsnips.

What is the average price for a grater?

The average price of a grater is between $10 to $40. A factor for this price range difference is whether the grater dishwasher-safe. Higher grater price points can mean that it has more features such as an enclosed storage space to keep the grating surface clean and safe from dust.

What is the lifespan of different graters?

The lifespan of different graters is determined by the quality of the materials used to make them.

A plastic grater can last for 2-4 years depending on how frequently you use it and whether the grater has enclosed storage space or not.

Metal graters have longer lifespans than plastic graters because they are made from durable materials which can be sharpened using small metal files. However, if your blade starts collecting rust over time due to constant exposure to moisture, then you will need to buy a whole new one.

The most problematic part of a grater is its handle which may break if it is not made out of durable materials. A wooden handle can either be replaced or glued back together using crazy glue. Although certain handles are designed to be detachable so that they can easily be cleaned and dried after use.

How does grater material affect preparation?

Food preparation changes based on the type of grater that is being used. For example, micro plane graters work well for hard cheeses and chocolate while box graters are better for soft cheese and zesting lemons.

What effect does grater material have on taste?

Is it better to use small or large graters in the kitchen?

Kitchen usability refers to the function and structure of kitchen utensils that make them easier to use. Small graters are popular because they are easy to store and can be used for a wider variety of food types than larger graters which only work well for softer and smaller pieces of food.

Kitchen usability varies with function. For example, larger graters are preferred to smaller graters in cuisines where grated food is required in larger quantities (such as Indian cuisine) because it is part of the cultural cooking style.

The material a tool is made of can also play a role in kitchen usability. For example, metal graters are more difficult to clean than plastic ones because they cannot be washed or immersed under running water to remove food leftovers. 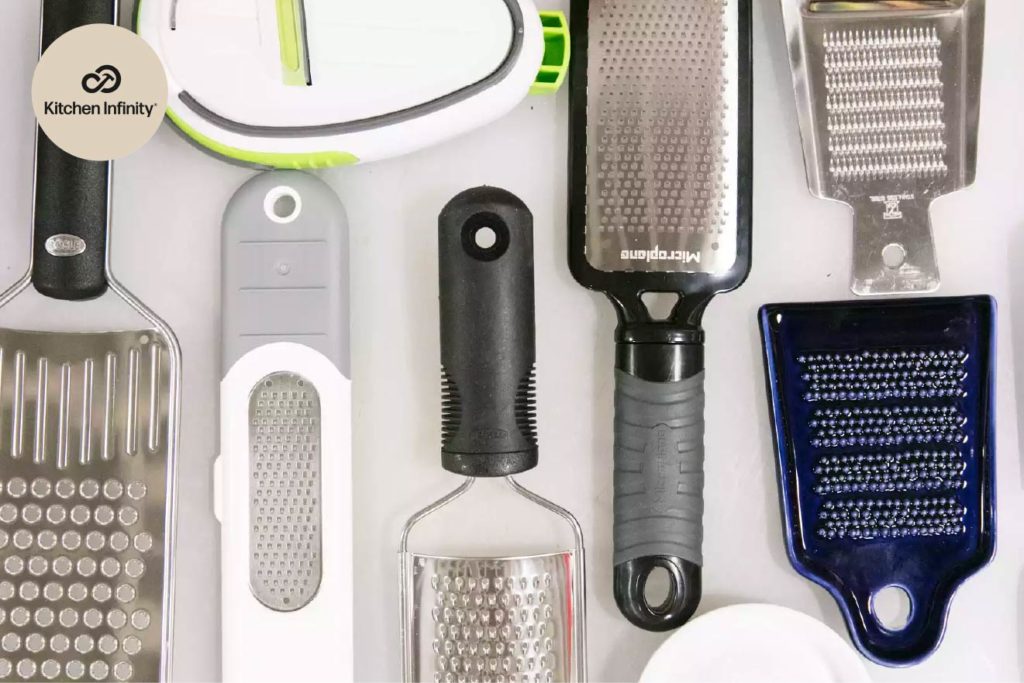