How To Remove Fluoride From Water Cheaply 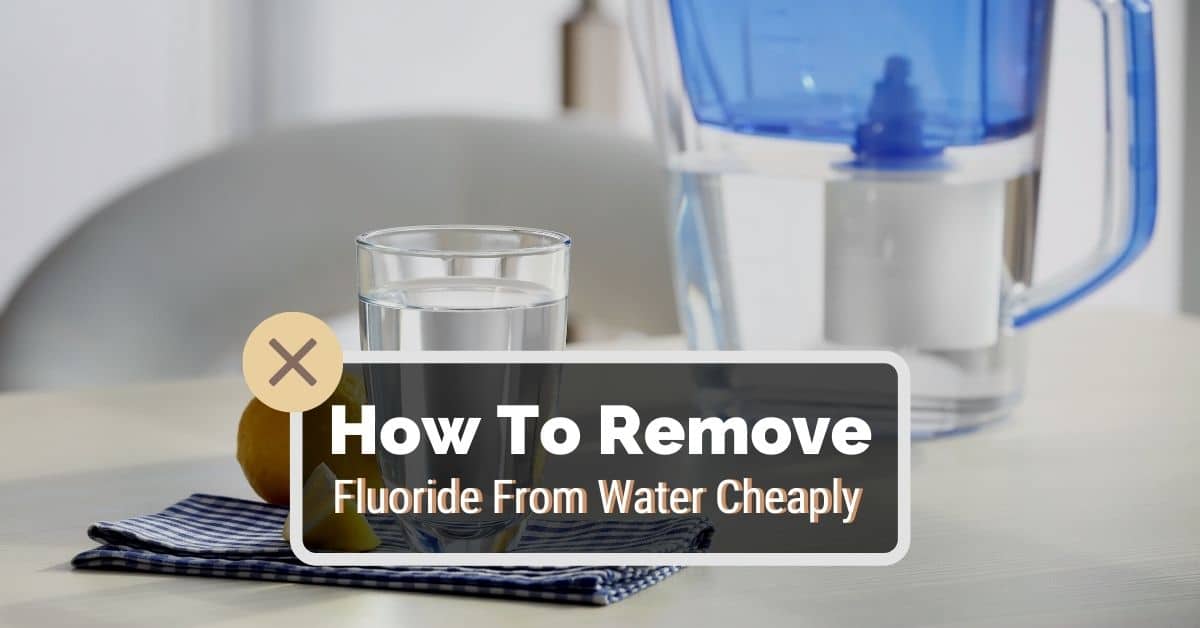 Although Fluoride was originally added to our water supply to aid in the growth of healthy teeth and stop tooth decay, many people are becoming concerned about health problems due to long-term Fluoride consumption. These concerns have prompted them to look for ways to remove the substance from their tap water.

Unfortunately, Fluoride is more difficult to remove than other common chemicals found in drinking water like Chlorine and calcium, meaning only a few methods will work.

After extensive research, we have identified the best answers to the question ‘how to remove Fluoride from water cheaply, which we will dive into below.

The easiest, and perhaps most cost-effective method to remove Fluoride from your drinking water is by using a water pitcher equipped with a fluoride filter. When the right filter is chosen, at least 95% of Fluoride and other contaminants are removed, leaving you with chemical-free drinking water.

The major drawback to this method is that the average countertop water filter only holds a few liters of water at most, meaning you're left with a fairly limited supply of fluoride-free drinking water. Aside from this, when you run out of filtered water, you will need to wait at least 10 minutes before another batch is ready.

The next item on this list is a filtration system that attaches directly to the faucet of your kitchen sink. These small filters use a replaceable cartridge consisting of a micro screen layer in conjunction with activated alumina. For those who are unaware, activated alumina is a form of aluminum oxide, and according to the EPA, is one of the most effective substances for removing Fluoride from water.

As with all water filtration systems, the filter needs to be changed every so often. Luckily, these filters are usually quite inexpensive and swap out very easily. Furthermore, these faucet mount filters are an environmentally friendly way of removing Fluoride from water. Unlike some others methods we will discuss, these faucet filters are entirely passive, meaning they require no energy to operate.

All-in-all, faucet mount water filters are one of the best, most economical, and effective ways to remove Fluoride from your drinking water on demand. Their only downside is they are limited to small faucets and not suitable for filtering a large volume of fluorinated water at once.

3. Use Holy Basil To Remove Fluoride From Tap Water

Holy basil, sometimes referred to as sacred basil, is a natural way of removing Fluoride from water that not many people are familiar with. The process is fairly simple and requires soaking the leaves and stems of the plant, dried or fresh, in a container of water. After about eight hours, roughly 80% of the fluoride content will be gone, bringing the fluoride concentration levels down to a safe amount.

The general guidelines suggest using roughly 80mg of plant material for every 100ml of water. While you can use more, the added benefits of using more are nearly non-existent and result in a waste of plant material more than anything else.

Once the eight hours is over, the water is filtered and stored for future use. As some will be quick to point out, the main problem with this method is that waiting eight hours to remove Fluoride from the water is highly impractical for most. Furthermore, the fact that it only removes roughly 80% of the fluoride content in a given amount of water makes it less effective than other methods.

4. Use Distillers To Filter Fluorinated Water

Distillation is one of the oldest methods of filtering water and is still in use today. Getting distilled water involves taking boiled water and placing it in one container and letting the steam rise. This causes water vapor to collect, which then passes into a second container, whereupon cooling down, regains its liquid state.

If this sounds confusing, think of it this way – distilling water is essentially boiling water and collecting the steam in another container. Contaminants, Fluoride included, stays in the first container, and the second container is filled with distilled water.

The major downside to using this method is that the energy input required to heat the water to its boiling point can add up in the long run, making it not a very cost-effective method. Furthermore, the process can take several hours which, much like the holy basil method, is highly impractical.

When it comes to the question of how to remove Fluoride from water cheaply, there is perhaps no better answer than through reverse osmosis. Reverse osmosis is a water purification technology that uses force or gravity to push water through a type of mesh. This mesh contains very small pores that allow water to pass through, but filter out ions, contaminants, toxins, and yes…even Fluoride.

A reverse osmosis system for fluoride removal can be installed to provide clean water to the entire house or for a single water source. When installed for the entire house, they are known as point of entry systems, since they aim to remove Fluoride from water as soon as it enters your home. These systems usually cost roughly $1,500 to install, but require very little upkeep.

The smaller reverse osmosis systems, which hooks up to a single source and removes Fluoride on demand, can cost anywhere from $250 to $500 depending on the make, size, and quality.

Overall, these reverse osmosis systems are the best way to remove Fluoride from water and once installed can cost as low as $0.02/gallon of water filtered.

Another great way to remove Fluoride from your tap water is through a gravity-fed filter. A gravity filter comes as a cylindrical device comprised of two chambers. The upper chamber, where the fluoridated water is placed, is separated from the lower chamber by a thick mesh filter. Unlike the common reverse osmosis filter which uses electricity to apply force to the water, gravity filters rely on the power of (you guessed it) gravity, to pull the water through the mesh filter and into the lower chamber.

Once all the water has passed through the filter and made its way into the lower portion of the filtration device, the previously fluoridated tap water can be considered safe to drink.

Of all the economic methods of fluoride removal that are available, gravity filters are one of the better options. However, the process is not as fast as a reverse osmosis filter system and it also suffers from the same issue as the water filter pitchers in that they can only hold a few liters of water at once.

7. Under Sink Filtration system To Remove Fluoride From Water Supply

Earlier on in this list, we discussed filters that attach directly to the kitchen sink faucet. For removing Fluoride from water on demand, these systems are one of the best. However, not everyone likes the look of them, especially if you have put a lot of time, thought, and money into renovating your kitchen. While some manufacturers have attempted to make aesthetically pleasing models the results have been lack luster.

As an alternative, a similar style system can be installed under the sink counter which will remove Fluoride from water before it leaves the faucet. These systems are a little more expensive and require extra work when it comes to installation. Unlike the faucet models, these under the sink systems require some minor plumbing work to install successfully.

8. Use A Water Bottle Equipped With A Built In Fluoride Filter

Most outdoor enthusiasts will be familiar with water bottles that are equipped with their own built-in filter, one that hikers and climbers often use to remove contaminants from a local water supply such as a river, lake, or stream.

These water bottles work very similarly to the gravity filter we spoke about earlier. The bottle is divided into two chambers which are separated by a mesh filtration material. As water passes through the mesh, it removes toxins, chemicals, and anything else you don't want in your drinking water.

It should be noted that not all filter water bottles are able to remove Fluoride, as some employ a basic carbon filter. Contrary to what some people may believe, carbon filters will not remove fluoride from water. When looking at a filter water bottle, check to see if it uses activated alumina which, as we discussed earlier, is a very effective filtration material and can bring fluoride concentration levels close to zero.

The most glaring downside to these water bottles is that they can only filter a very small amount of Fluoride at a time, although they are an excellent solution for treating fluoridated water on the go.

Other Ways To Limit Fluoride Consumption

It is estimated that the liver only eliminates between 45% – 60% of the Fluoride we consume, meaning the rest accumulates in our body. It is this accumulation process that has people worried about the long-term health risks. After all, the FDA does list fluoride as a neurotoxin.

While we are on the topic of how to remove Fluoride from water cheaply, we should also take a moment and briefly look at some ways we can further limit our fluoride intake.

Most brands of toothpaste contains Fluoride to help support healthy teeth and stop tooth decay. Although you don't actually swallow your toothpaste, some do inevitably make its way into your stomach, and some fluoride can still dissolve through the thin skin under your tongue.

Far too many people use charcoal filters in hopes of removing Fluoride from their water. Unfortunately, charcoal does not work. As we have touched on several times already, activated alumina is a much more effective choice.

Some people believe that boiling tap water can effectively reduce fluoride levels. This simply isn't true, and boiling water will do nothing to remove or reduce the fluoride content from tap water.